Taking one for the team

Zaika is on Lower Stephen Street, opposite what used to be Mercer’s Hospital. 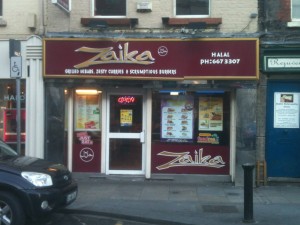 A big poster in the window advertises a ‘Super Fiver Offer’ effective from midday until 7pm and, for students, from 7pm until midnight also. Too good to resist?

10 dishes are included in the offer … 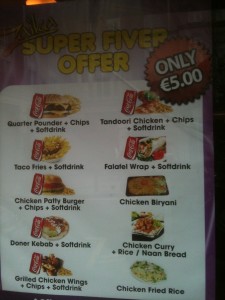 I wandered in this afternoon at about 1.45. The place could do with a bit of a make-over or, at the very least, a lick of paint. It’s very dull with NO atmosphere. Four tables are firmly bolted to the floor each with six chairs.

At the counter, I ordered the chicken curry with naan bread. I was asked did I want anything to drink. I suggested a glass of ‘ordinary’ water, whereupon the staff member rang up an extra €1.20 on the till. I changed my mind, paid my fiver and sat down.

The food arrived about 7-8 minutes later, on a tray. 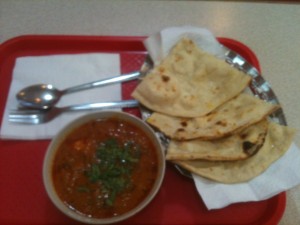 Let’s start with the good points. The naan was freshly cooked and warm, with some nice crispy charred bits. The bowl of curry had a sprinkling of fresh coriander on it. Erm … that’s about it.

So. The not so good points. The curry was VERY oily. It contained a lot of sauce (I’m pretty sure from the taste that it was Patak’s Balti sauce – blandness in a jar). Buried in the sauce were four smallish cubes of chicken – the sort of chicken cubes you’d get in your run of the mill take-away: processed, tasteless and with a texture that isn’t quite what you’d expect from chicken.

eatforafiver’s standards are not high by any means. But this didn’t meet them. It didn’t even come close. I ate it, for the cause, but as I type this, I’m regretting it. Much.

I can’t think of anything else I want to say about Zaika. I’d suggest you give it a miss.

A little way along Lower Stephen Street, going towards Aungier Street there’s the Wok In, offering various noodle dishes in a box, for a fiver or under. There’s one table but no chairs but I might bend my rules a bit and try it out. Next to it is another place offering pizza slices, chips and a drink for a fiver. I think it’s called Sufi’s. Over the crossroads, on Upper Steven Street is a guest house (yeah, I was wondering that too) with a restaurant/bar on the ground floor. A board outside advertises various specials, including steak pie and chips, for a fiver. I’ll explore these in more detail in the future.

The Zaika curry seems to be getting the better of me now, unfortunately, so that’s it for now …