Goose on the Loose is a warm, comfortable, laid-back café-style restaurant on Kevin Street, just next to the junction with Wexford Street. 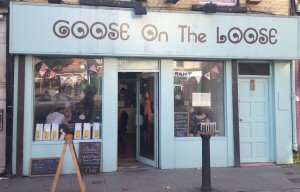 It’s small, seating about 18 people. The decor is … I don’t know … thoughtful. Some candles, ornaments, potted plants, a huge armchair.

A CD player sits in a brick alcove, playing Craig David and Madonna (not together, thankfully). 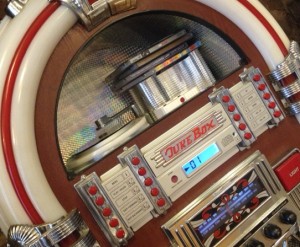 It’s the sort of place you could spend some time in, with a paper, coffee and a pastry.

It wasn’t my first choice but I’m glad I ended up there. I had intended to try out Karma Stone on the corner but they’ve changed their Fiver Friday deal from all day to 3pm-7pm. Still good value, I’m sure, but I didn’t have time to hang around until 3 to find out.

Goose on the Loose (their Facebook page, needing updating, is here) has a varied menu. It opens near enough to 8am apparently and serves breakfasts. It also serves pastries, soups, salads, crepes, a selection of Hot Pots and a few other things besides, closing at 5pm. Click on this to get an idea of today’s offerings … 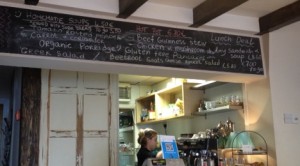 The non-soup choice for under a fiver is limited to a couple of omelettes, so that’s what I had: an own choice omelette, with two fillings from a choice of about eight. I chose ham and feta.

The kitchen area is tiny but evidently big enough to crack a couple of free-range eggs and whisk up an omelette, which arrived soon enough, with two slices of fresh toast and a little bowl of (mercifully) soft butter. 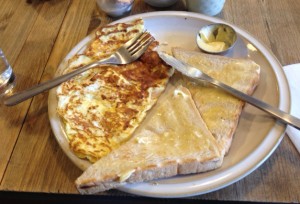 Actually, this was a perfect lunch for today and I’m kind of glad I wasn’t faced with wading through lots of meat and spuds. It was light, soft and smooth with the tanginess of the feta offsetting the slight cured flavour of the ham. The toast was unexpected, but a good accompaniment. Service was helpful, pleasant and efficient. And it only knocked me back €4.60. 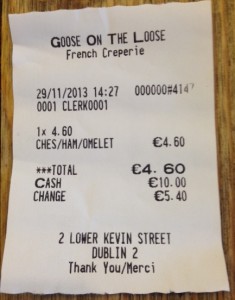 I’d like to try GOTL for brunch some weekend (it opens at 10 on Saturday and 11 on Sunday) and I’m kind of sorry I don’t live as close to it as I used to. This was a good eatforafiver experience.

On my way down Wexford Street, I passed a place I forgot to include in my recent post about Wexford Street fiver eateries. Here it is … 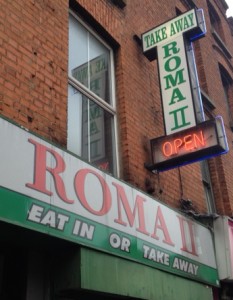 If you’ve a hankering for a battered sausage, chips and a can and you’re a bit short, you could try it out. I was last in it 25 years ago.

A few doors away, a place called Evergreen, in a very limited space, carries a brilliant range of food. If you’re keen on mushrooms, this will be your new home. I counted 10 different types of mushrooms, including these trippy-looking ones … 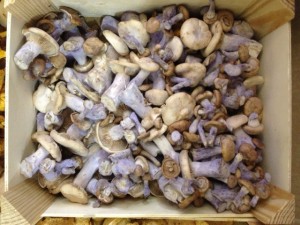 Artichokes, pomegranates, alfalfa shoots, sumac … Evergreen seems to stock it all. Yelp it here. Did I just say that? 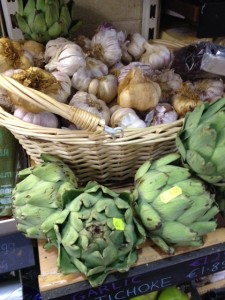 I’m losing it. That’ll do for today, so.

Bangers and Mash at Kiltipper

At the risk of sounding like an oul’ fella (which, in actual fact, I am, I suppose), I remember Kiltipper Road (near Old Bawn) when it had a few cottages, a pitch and putt course, the post office sports club and a couple of travellers’ caravans. That was 30 odd years ago when I used to cycle/motorcycle/drive (it was, even then, a long-term relationship, you see) up it to visit my girlfriend (now my spouse).

Now it seems like it’s one big housing estate with, I guess, a fair amount of negative equity contained within its not so leafy avenues.

In the middle of it is Marlfield Mall, with a Eurospar, a Ladbrokes, a few shuttered premises and the Kiltipper Café Bar, my venue of choice for today. They had included eatforafiver.com in a tweet, you see, and said that they’d been doing lunches for a fiver for the last four years. So, I thought I’d give my usual city centre ramblings a rest and head up the hills to see what was going on.

When I found it (turn right at the roundabout half way up Kiltipper Road and keep your eyes peeled), it didn’t look promising. Utilitarian and a little bleak-looking. 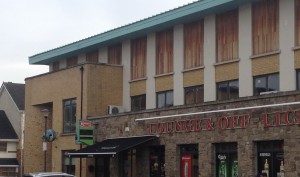 Inside, however, I found a vibrant, warm, well-run, dynamic restaurant-cum-bar. 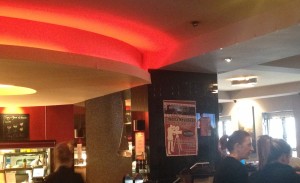 The place was heaving with young families, groups of women and some elderly people. A few older men sat at the bar with newspapers and pints but, for the most part, groups sat at tables enjoying lunch and a chat. Servers whisked around, taking orders, carrying plates of food, clearing and wiping tables, cleaning up spills. The place is pleasantly lit, with several TV screens showing a variety of channels, but none too loud to be obtrusive.

Whoever runs this place has a purpose and that seems to be to make Kiltipper Café Bar a social hub for the area. Their food offerings are cleverly packaged to suit a variety of tastes and pocket depths. They also have a decent range of vegetarian and gluten-free dishes. They serve breakfast, lunch and bar snacks throughout the day, have a carvery on Sunday and have themed nights, including this … (click = big) 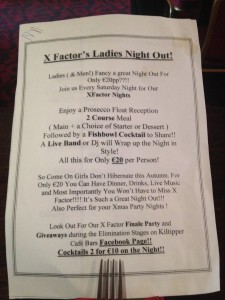 It’s a pub, yes, but the emphasis is very much on food, or drink accompanying food. And it seems to work, in large part thorugh a busy kitchen and the fastest moving group of servers I’ve seen for a long time. Despite their busy-ness, the servers were attentive, efficient and friendly.

My food arrived soonish with a glass of water: three BIG pork sausages, three scoops of mashed spuds and a ladleful of gravy with some wilted chopped spring onion. 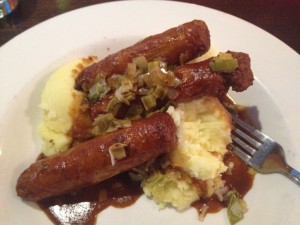 You know that I describe rather than critique the food on eatforafiver.com. I’m only spending a fiver after all and, although I absolutely love it when I get something super-tasty and complex, I’m pretty happy when I get a decent plateful of food. This was a good feed. I might have preferred the spuds to be a bit more buttery and the sausages a little less done but, hey, it was tasty, there was plenty of it, this is a pretty busy place and it cost a fiver. 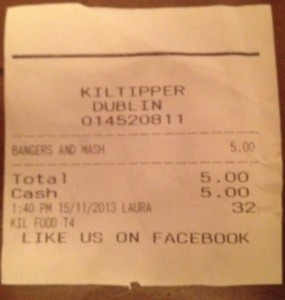 Dublin city is awash with niche eateries at the moment and there’s a real PR battle going on for the hearts and minds of the eating public. With all that going on, we can forget and underestimate the value of a suburban pub restaurant like Kiltipper. It’s not serving Michelin star food and it’s not pretending to be anything it’s not. It’s providing a warm cheery venue with lots of activity in a relatively featureless suburban environment. It’s feeding people a variety of affordable dishes and it’s doing pretty well by the looks of it. And those servers. They can move fast. 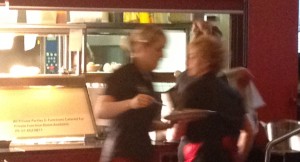 There’s something about Pablo

There is something very satisfying about a burrito. It’s hard to put my finger on it. Maybe it’s the non-breadiness of the wrap. Or the interesting mix of textures of the beans, rice, cheese and salsa. Or the tingliness of the salsa itself. Or even the mixture of hot and cold temperatures. I don’t know what it is. But I like it.

I won’t bore you with my roundabout journey today (including accidentally trying to go the wrong way up a one-way street) but anyway, eventually, I arrived at Clarendon Market, the laneway between Clarendon Row and South William Street/Johnson’s Place. Peter’s Pub is the nearest landmark I can think of.

I was heading for Pablo Picanté, a burrito place. Its webpage contains location, opening hours and menu. Its Facebook page is here. If you scroll down the Facebook page a bit you’ll find a picture of a very cute-looking chihuahua in a sombrero. The page has 5024 likes so I’m guessing Pablo Picanté is pretty well known. (It has another branch on Baggot Street.)

At first sight, the place looks a little cramped, 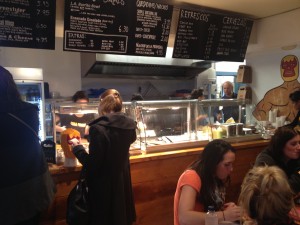 … with two huge tables and four benches filling up the available space. But actually, it’s HUGE. At the opposite end to the door there’s a connected space with seating against the wall and then upstairs there’s seating for about 50 more people. Outside there are about four tables, each with four chairs. So, it and its newer cousin next door, Pablo’s Tortas, together can probably accommodate about 80-90 people at a push.

It was buzzing when I was there. Lunchers (students mainly, with a scattering of young male shoppers) were finishing up and getting ready to go and there was a steady stream of people coming in and placing orders, the majority intending to eat in but some taking food away. A lot of customers were wearing hats.

When you’ve ordered your food at the cash desk, chosen your preferred level of salsa heat from this chart, 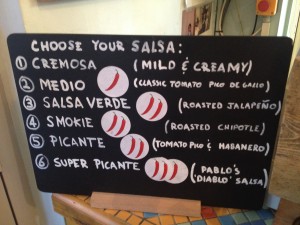 … (I chose Picante), and paid (in my case, €4.75, for the Bean and Cheese Burrito), you are given a receipt with an order number and you wait for your burrito to be made. Some people find a seat. Others (like me) wait and watch the fascinating, efficient and speedy process of burrito manufacture.

When your burrito is ready, they call out your number and you collect your food. If you’re already sitting down, someone will carry your food around the restaurant, shouting your number until they find you. This seems like a very time/staff consuming process. On at least three occasions while I was there, a staff member walked around the ground floor, up the stairs, down another staircase and had to go outside before she found the (hopefully) grateful recipient.

Anyway, I waited beside the counter, like a good boy. Here’s what I got … 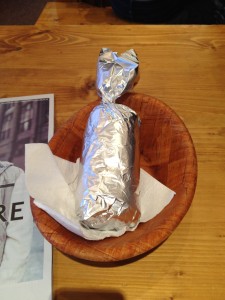 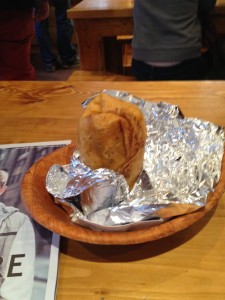 and bitten in to … 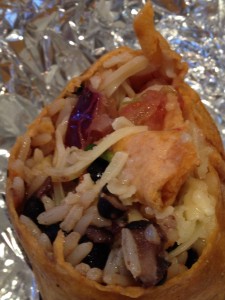 Gloriously tasty, with all the mix of textures spoken about above, lovely fresh tomato chunks and a nice burst of heat from the salsa that left my mouth and lips tingling for ages afterwards. It’s quite a size, though you wouldn’t guess that from my crappy photos. Very filling and very satisfying.

I suppose that if I hadn’t been restricted by my fiver limit, I would have ordered one with meat in it. But actually, in a creation such as this, I didn’t miss it and, as I often do when I eat a meal without meat, I felt virtuous after it. Full and virtuous. By the way, the little wooden bowl is a good idea. Burritos leak.

The Bean and Cheese burrito is the only one under a fiver on the menu. I’m a little confused about the student offer. On the website, there’s a Student offer for a fiver. In the restaurant itself, this board 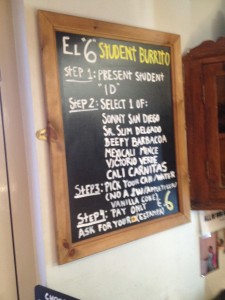 seems to suggest that it’s €6 but that it includes a drink. Whatever, it’s pretty good value anyway.

I mentioned Pablo’s Tortas next door. (Torta = This.) It definitely has a student deal for a fiver, and here’s the proof … 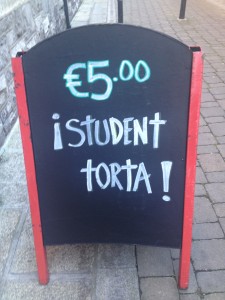 I like Pablo Picanté. It’s buzzy and noisy with enthusiastic chat. It’s bright and clean. And my burrito was satisfying and only cost this … 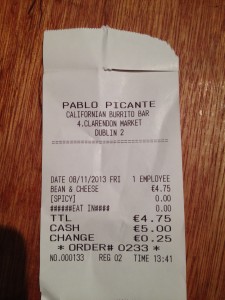