I used to spend a fair amount of time in the Buttery. In fact, in my final year in college, I used to spend most Tuesday afternoons there, between lunchtime and after the tutorial I used to miss on a regular basis. In those days it was mainly a pub, with an added haze of marijuana smoke. It was also the place where I had my first legal pint of stout. Angela worked there. She wore socks, sandals and too much make-up. I remember the Buttery being pretty basic, a little dingy, with not great coffee but quite outstanding chocolate biscuity things.

It’s now HUGE … and bright. And it does food, and probably better coffee than it used to. 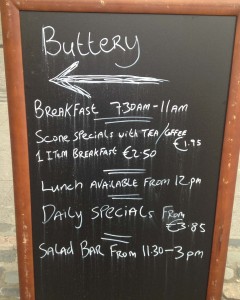 For those who don’t know, this is the Buttery in Trinity College Dublin (shortly to become Trinity College, the University of Dublin). The entrance is located to the right of the steps leading up to the Dining Hall, the Buttery being in its basement. 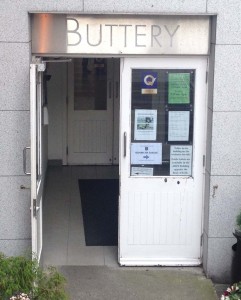 It’s actually quite a good space, with several (maybe 4 … ish) distinct areas and a variety of seating to suit individual diners/snackers and different size groups. 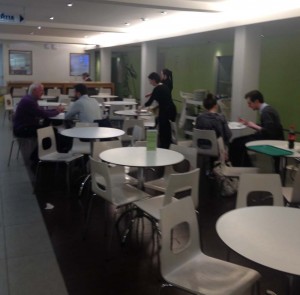 The furniture is standard canteen but the Buttery is clean and well lit. One of the spaces, with vaults, has more subdued lighting and seemed today to be more popular than the others.

There’s a pretty massive selection of food on offer. At the lower end of the cost scale, there’s coffee, biscuits, cakes, sandwiches, rolls, paninis and so on. I didn’t really pay much attention to these, to be honest, although it’s hard to ignore the preponderance of signs for the Lavazza brand of coffee which must have a thing going on there.

For more substantial eats, there is a salad bar, with cautionary instructions … 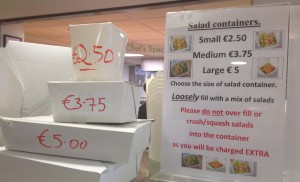 … and with a reasonable selection of cold dishes; most, however, involving mayonnaise to a greater or lesser extent. 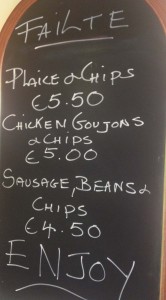 … the size of the sausages providing brief but significant temptation. And a hot food section with the following items, the first once being beyond my budget unfortunately: 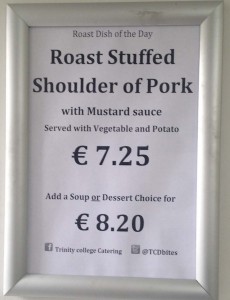 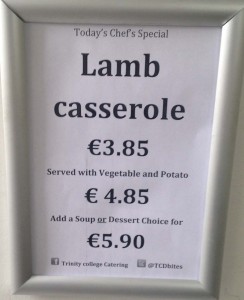 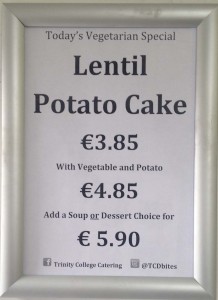 The idea of potatoes accompanied by potatoes didn’t really appeal to me although it was probably the slightly healthier option. However, my choice of the lamb casserole was confirmed when I saw the size of the portion being ladled on the plate of the customer in front of me and that the meat to sauce ratio looked pretty good. 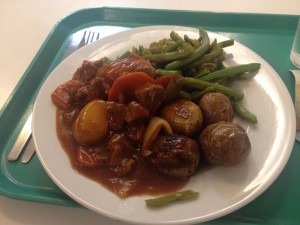 A lot more potatoes were destined for the plate but I stopped the server just in time.

So, what have we got here? A good number of potatoes, small, roasted in their skins. A ladle and a half full of french beans. And a truckload of casserole. A fair feed for my €4.85.

Let’s remember two things here. Firstly, this is a canteen rather than a bistro. The Buttery is catering for a variable number of hungry students, some staff members, some people like me drifting in because we happened to know that there’s cheap food available, and people such as the older woman beside me who comes in at least once a week and gets a cheap but substantial hot meal. Secondly, this large plate of food cost less than a medium size Lindt Easter bunny.

The casserole, which contained quite a few lamb pieces, carrot, onion, and red pepper, was VERY tomato-ey. But there was lots of it and it was hot. The potatoes were lovely: soft inside, with an almost crispy and slightly caramelised skin. The beans weren’t great to be honest. the serving comprised a mixture of beans that had been in the bain-marie for some time and some that had been more recently cooked. They were a bit soggy. Edible but soggy.

But hey, I’m not complaining. This was a hearty feed in the centre of town for €4.85 and, if you don’t like the sound of the casserole option, there’s lots of other things to choose from for your fiver.