Presidential election day. Cynical timing by the Government to hold it on a Thursday, effectively disenfranchising thousands of students and closing a massive number of primary schools. How is deliberately disenfranchising young voters meant to restore confidence in the efficacy of politics?

One positive consequence, however, was that the young lad was free to join me in the latest episode of the gentle eatforafiver extravaganza. As soon as I mentioned it to him, he chose the venue: Burritos and Blues on Wexford Street. 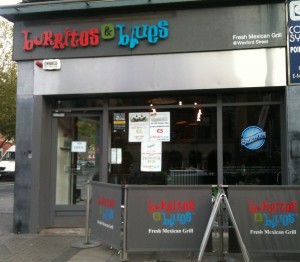 I’ve eaten here before – twice – following a suggestion by the older lad who had fed himself there several times following late nights in the nearby Palace nightclub. Having (once or twice) visited late night eating establishments myself, following evenings spent in various hostelries, I understand how late night eating can seem to be quite a different experience from normal eating. So I initially took the older lad’s initial recommendation with a pinch of salt but changed my mind after my first visit. It is indeed a good place to eat.

Burritos and Blues has three branches (I think. The website is not too clear, or up to date): one in Wexford Street, one in Stephen Street and one in the IFSC, near the National College of Ireland. The Wexford Street branch is small but brightly decorated with seats inside for about 24 or so and two tables outside. It also has a counter in the middle on which I suppose you could lean, if necessary.

There’s a big poster behind where they make up the burritos which explains the permutations and alternatives. But it’s easier just to ask. And then it’s entertaining to watch.

One of the things I’ve liked about Burritos and Blues on each visit has been the good humour and pleasantness of the staff. You’re invariably met with a smile and your questions are answered with good grace and humour.

We both chose to have burritos, the young lad getting the student option (€5) while I chose the Diet Burrito (€4.15). The burritos are made in front of you and you choose between certain options. The tortilla wrap is placed on the counter and you choose between two bean paste options. Rice goes on next and then you have a choice between minced beef and chicken. The young lad went for beef and I chose chicken. The wrap is then passed to the next server who adds a salsa. There’s a choice of 4 different strengths, from mild to ouch. The young lad went for number 2 and I, for the hell of it, opted for number 4. Grated cheese, lettuce and chopped tomato are added and the burrito is quickly and expertly rolled up and placed in foil.

We asked for glasses of water, paid and took our seats. It being the end of October, the young lad chose to sit outside.

The restaurant was pretty full at lunchtime. Mostly students, at a guess (DIT is very close) with a fair smattering of besuited blokes also. Not many women, now that I think of it. 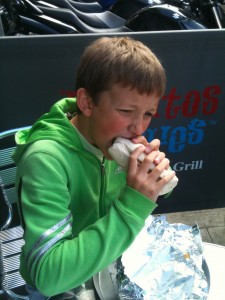 The young lad tucking in to his student burrito 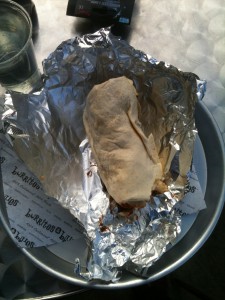 I asked the young lad was he enjoying his. ‘Hell, yeah’, was the response, which I took as a positive. He couldn’t quite finish it and I had a bite of the left-overs. It was tasty with no part of it dominating any of the other parts. It kind of feels healthy too, for some reason.

Mine was hot and I don’t think I’d go for salsa number 4 again. It was quite overpowering and somewhat eye-watering. I could still taste the other components but only just. At a previous visit i opted for salsa number three which is hot enough and complementary rather than dominant. The diet burrito was filling, though, and excellent value for €4.15.

I’m not averse to a burger when I have the hunger but this is a tasty and far more interesting alternative and it feels a lot healthier. I’ve looked at the prices in some of the other burrito joints in town and Burritos and Blues is the only one that has food for a fiver or less. Fair play to them. I’ll return, probably frequently.