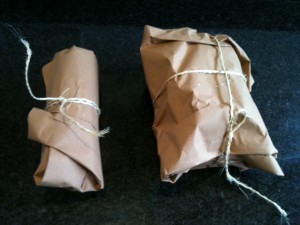 I like IKEA. I like the ‘Would-ya-look-at-that’ factor. I like the sheer usefulness of many of the products. I like the fact that you can buy well designed and durable items there for half nothing. I like the fact that they have 18 different types of pillow and that they’ll take the time to help you to find the right one. I like it that young people maybe setting up home for the first time can furnish and equip a flat or house from there at reasonable cost. That’s not to say that it also sells a lot of stuff that I wouldn’t touch with a bargepole – but, you know, whatever.

IKEA in Ballymun is massive. I went there at lunchtime today with the younger lad (E) and a friend of his (G) both of whom are doing a summer course in nearby DCU. It takes ages to get around the whole thing but luckily (or, more likely, by design) the restaurant is near the entrance, at the top of the escalator.

The restaurant seats 550 (according the the website) and is really more canteen than restaurant. You take your tray and your cutlery and you start by choosing fruit, dessert and bottled drinks from chilled cabinets. You then reach the hot food counter. The choices under a fiver included pasta and Mediterranean roasted vegetables, chicken breast and pasta, and meatballs, gravy and mash (or chips). With an IKEA Family Card, you could have stuffed salmon fillet with chive & butter sauce and carrots for €4.95, although without one, it’s €5.50. (For more options click here) 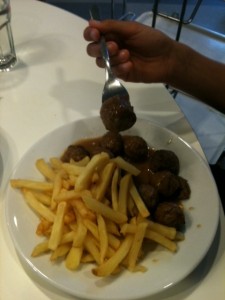 I had 10 meatballs with gravy, mash and a sweet berry sauce (same price). E and I also chose Swedish apple cake (€1!) while G went for a refillable soft drink (also €1). 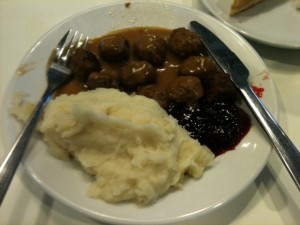 My meatballs and mash 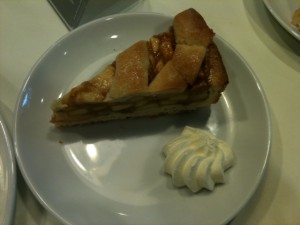 The verdict. Well … it’s not fine dining but, to be fair, it was filling and tasted grand. The meatballs were small but unmistakably meaty, and 10 is plenty. The gravy was a bit gloopy in a thickened-by-cornflour sort of way but ‘worked well with the meatballs’ (said E). The mashed potato was surprisingly good, and the sauce was kind of jammy. The chips looked as if they’d been out on a warming tray for a while and were ‘OK but not the best I’ve had’ (E again).

E also made the point that the apple cake would have been better if it had been hot and, although the pastry was a bit stodgy, the apple filling comprised real apple pieces with a good sprinkling of cinnamon.

The boys were satisfied and so was I, and the bill for the 3 of us came to a pocket-warming €14.85. It’s a popular place to eat by the looks of it and it’s not difficult to see why. 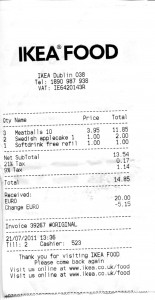 Downstairs, near the checkouts, is what they call their ‘Bistro’. In actual fact, it’s a fast food counter beside which are high tables. You can’t sit or perch and so it doesn’t fit my eatforafiver criteria. That said, however, you can get 2 hot dogs, a serving of chips, a refillable glass of a mineral and an ice cream in a cone, all for €3.45, which would fill a reasonably substantial gap.

It’s almost impossible to leave IKEA without buying SOMETHING. Here’s the bunch of random items I got: coffee, crab paste, elderflower cordial, and chocolate. Why? I have no idea. IKEA is like that. 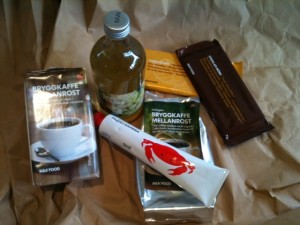 The comments are closed.