Archive for the ‘ Korean ’ Category

I wouldn’t have gone to this place if Margaret E Ward (MD of ClearInk and inspiration for and founder of womenonair) hadn’t suggested it in a comment on a previous post. 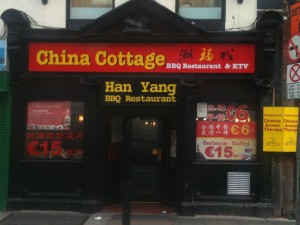 There’s nothing on the windows of the China Cottage/Han Yang to suggest that it offers anything for a fiver or less. But Margaret said that it did Dim Sum-type dishes for as little as €1 so we had a closer look.

Pasted to the wall beside each table was a menu, mostly in oriental script, but with some English, and helpful pictures of some of the food on offer. And yes, some of the items cost as little as 50c.

We, in this case, were the young lad (not back to school yet) and me. I must say that I prefer to do these eatforafiver things with some company and the young lad will try most things (once, at least), gets into the spirit of the adventure that is cheap food and is a good dining companion.

We were approached by a sceptical staff member. I say sceptical because she kind of looked us up and down as if we might have strayed into the wrong restaurant by accident. We were the only European-looking people there, sure, and maybe she felt that we weren’t really looking for the food she had to offer. She even checked to see whether we really wanted oriental food.

Anyway, we consulted the pasted up menu and made our selections. She wrote them down and pointed to a few pots of broth and other items that were laid out on a table to the side of the restaurant. She said something that I didn’t quite hear and went to fill our order. I confess to having been a little apprehensive about approaching her again to explain what everything on the table was and what we were supposed to do with it, so we just filled a bowl each with what turned out to be a very tasty soup containing rice, some molluscs and bits of ham. 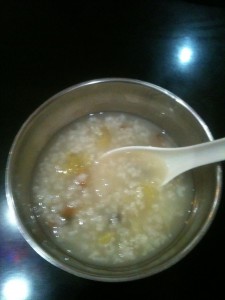 Some of our order arrived soon after and we tucked in. The first batch of food comprised a fried dumpling with chives and egg (€1), a pork meat pie (€1), a deep fried sesame ball with red bean paste (50c) and an oyster pancake with pork and veg (€1.50). 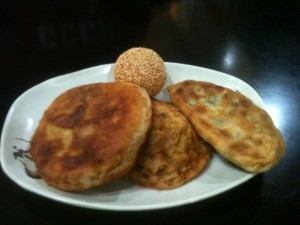 We divided each item in half, grabbed our chopsticks and ate with relish.

They might not look that appetising in the photo but they tasted good, with flavoursome fillings. The only item the young lad wasn’t keen on was the sesame ball, and mainly because the red bean paste was quite sweet and he felt it didn’t go well with the sesame seeds. 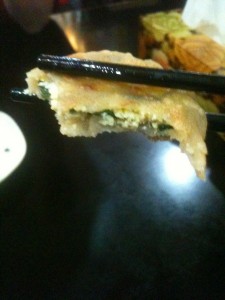 Just as we had finished the first batch, the rest of our order arrived. Unlike batch #1, which appeared to have been pre-prepared and ready for serving, the other items had been freshly prepared. They were a scallion pancake (€1) and six steamed dumplings (€5).

These were gorgeous. The scallion pancake was a bit like a paratha, with a flaky buttery texture and a lovely mild spring onion taste. The dumplings were moist and soft, with a very tasty pork-based (I think) filling. 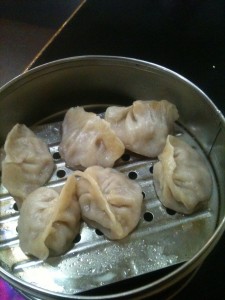 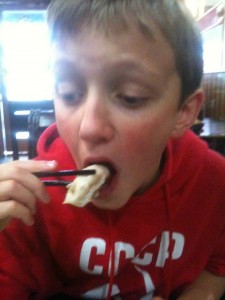 Our surroundings were plain and quite utilitarian and there were just three other solo diners (who evidently did know what to do with the broth and food on the table I referred to earlier). There’s a big TV on the wall in one corner, tuned to an oriental channel. For food this cheap, surroundings don’t bother me, as long as the place is clean. And it is, although the toilets could do with a bit of a mop and someone to empty the overflowing bin.

We didn’t hang around once we’d finished. When I went to pay, the sceptical staff member asked how we’d liked the food. We told her we enjoyed it and her scepticism vanished immediately, replaced by a warm and broad smile. We did enjoy the food. In fact the young lad was most impressed, suggesting that it was ‘up there’ and saying that he’d like to come back.

So, finally … a confession. The food for the two of us came to €12. Ooops! I didn’t factor in the soup when calculating the cost initially. Without the soup, it would still have been a good value lunch. Alternatively, we could have had the soup and a few other small dishes rather than those lovely dumplings and got away for a tenner for the two of us.

I’d say: go for it. (Thanks for the tip-off Margaret.)