(Note: The Mingle Marcade moved to Camden Street since this was written. I had a little wander around it just after it opened but it’s too soon to say what their food offerings will be. Il Siciliano, mentioned below, is staying in Thomas Street where the  market will open again under new owners.)

A few weeks ago, I was thinking that maybe I was near the end of the fiver offerings in Dublin. Then along came Garwin Liu with some Talbot Street and Parnell Street suggestions, Dublin by Mouth with a Dark Horse in Blackrock, and a Fringe-related wander through Merchant’s Arch, leading to Monday’s South American adventure.

Today it was my intention to go back to Merchant’s Arch to try a salad box from Staple Foods but a chance glance at some old notes on my phone diverted my attention. Eighteen months ago, I tapped in ‘Ferocious Mingle Market’ and nothing else. I had a vague idea it was near Vicar Street but that was about it.

Googling it today led me to its Facebook page, its location and a thought that maybe it might be worth a visit to see if there might be foodforafiver therein.

The Ferocious Mingle Marcade (sic) (FMM) is at 72 Thomas Street, close to the junction with Francis Street, beside a bus stop. 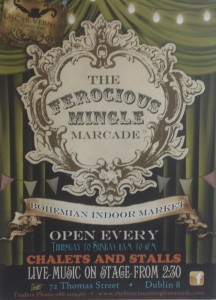 You might miss it if you weren’t paying attention and it only opens from Thursday to Sunday.

I like markets. And I liked this one. It was quiet but I suspect it gets busier at the weekend. It’s got a Gothic sort of thing going on and has stalls selling jewellery, vintage clothes, incense, objets d’art, hats, art and more besides. 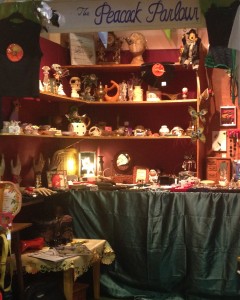 One of the stalls in the FMM

It’s dark(ish) and the music is mostly 70s rock/pop. Oh, I nearly forgot. It’s got a seating area with a cinema screen showing old black and white movies.

Food-wise, there’s Il Siciliano (selling a variety of traditional Sicilian delicacies, including Cannoli [on Sundays]), a vegetarian stall called Happy Food by the YogaHub (which may or may not do Broccoli Burgers) and the Mingleopolis. The first two will feature in future posts. 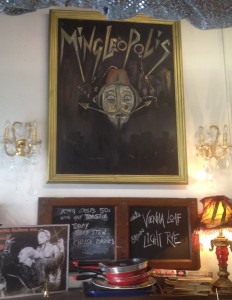 This was my choice today. 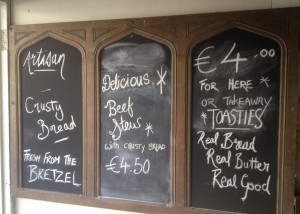 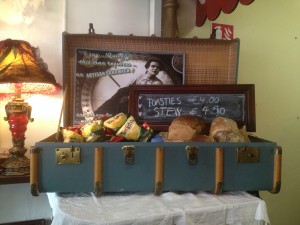 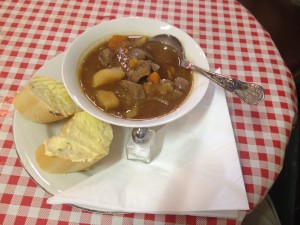 … served by Jade, a helpful and charming woman who, while I was eating, was making the stall spotless and who, after I had eaten, explained that the Mingleopolis was owned by the people who own the FMM itself.

The food, as you see, was simply but elegantly presented. The bread was freshly cut and that’s real butter on it. The tiny salt cellar was a nice touch.

The stew was lovely. Generous chunks of beef, potato, carrots, onion and swede in a rich peppery tasting sauce. It was a good helping, perfect for lunchtime. Actually, perfect for anytime. And it was nice and hot (steamy hot, that is), so I could take my time eating it.

Super value for €4.50. Really super value. I recommend it. Wholeheartedly.

I’ll re-visit the FMM because I do want to try the other two places I mentioned above. I may need to pay an extra visit on a Sunday to try the Cannoli, as an added extra.

Ah, Venezuela, or the Bolivarian Republic of Venezuela to give it its proper name, home to the Angel Falls (the highest waterfall in the world), the late President Hugo Chavez and almost 29 million people. The place is huge.

El Arepazo at Merchant’s Arch, on the other hand, is tiny. So tiny, in fact, that most of my photos, which are pretty poor at the best of times, today are unusable. So, instead, I’m going to direct you to their Facebook page: here. (Note: this page doesn’t seem to exist anymore but El Arepazo is still very much in business.) 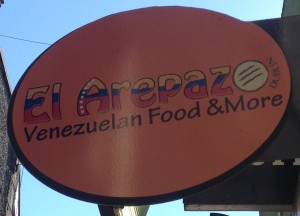 El Arepazo serves Venezuelan food: principally Arepas and Empanadas. EVERYTHING is a fiver or less. Did you get that? EVERYTHING.

Here’s the menu … (click makes BIG, which means that I don’t have to explain all the fillings) 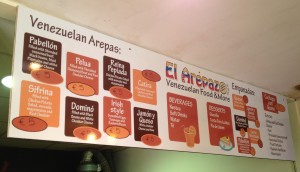 The big lad is back from University in the north of England where, he learned today, he won at physiotherapy. He can now fix people with his magic hands and a moist sponge. To celebrate, I felt he deserved a slap up meal and that’s how we ended up blowing a tenner in El Arepazo.

The people behind the counter are chatty and friendly, and happy to talk about Venezuela and its food. The food is made to order (maybe not always, when it’s busy).

We both went for the Arepas Pabellón. The Arepa itself is made from a batter of cornflour and water. This is poured on a griddle to cook and ends up like a substantial doughy (but not bready) pancake. The Pabellón filling comprises shredded beef, black beans (not the Chinese ones), fried slices of plantain and white cheddar. The Arepa itself forms a pocket into which the filling is placed. The whole lot is put in a small paper bag.

I said the place is small. It is. There are five chairs but the Arepa is a take-away sort of food, so eating in is possibly unusual. By the way, El Arepazo is open from 11am to 9pm every day except Friday and Saturday nights when it stays open until 4am for some serious post session soakage. 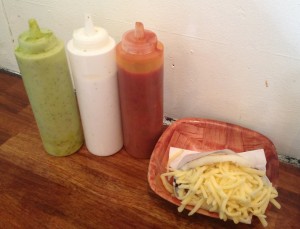 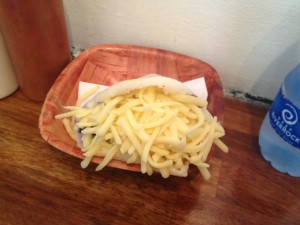 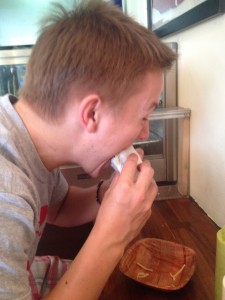 That last one is the older lad tucking in. Quite neatly. I made a mess with mine and had to finish it off with a fork and wipe the residue off my jacket with a tissue.

The sauces you see are a spicy tomato one, a creamy garlic one and a guacamole one. 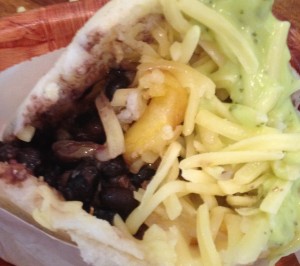 For something quite small, it’s amazingly filling and very tasty. We both felt pretty full after it.

When we arrived the place was full of young people at least some of whom I think may have been from South America. There was lots of chat and conviviality and the place has a nice friendly vibe about it.

I’m glad we went. The food is great value and I’d recommend it, if only to try Venezuelan food.

We saw this rather attractive street art on the way back. 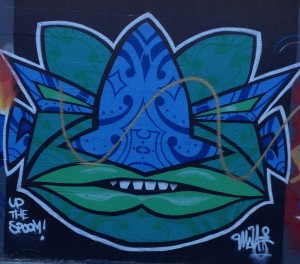 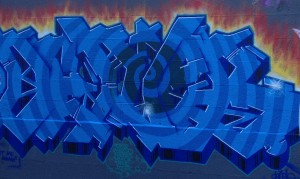 Good grief. Look at all this food … 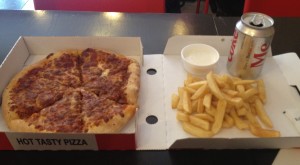 I have Garwin Liu to thank for this. He sent me a message through Facebook a few weeks ago, pointing me in the direction of that bit of Talbot Street near Connolly Station. There’s Star Pizza, the place responsible for filling my boots today and a few other places which I have on my list for later.

I’d forgotten Talbot Street was so long. In the distant past I worked for a few Christmases in Sheriff Street sorting office and I remember a damp-warm place with a lot of formica at that end of Talbot Street as the location of my first experience of a deep-fried egg. My post office service left me with a significant appreciation of the importance of wrapping parcels carefully with what, to some, might seem like an excess of Sellotape, and an olfactory memory of two-week old posted turkey.

It’s changed down there. A lot. There’s a hotel and small supermarkets. There’s The Lab, part of Dublin City Council’s quite sophisticated arts provision. There’s this … 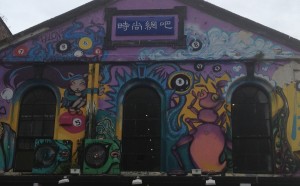 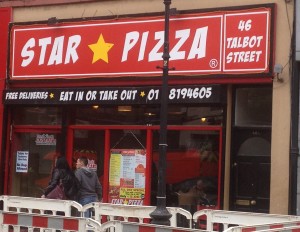 … with its all day FIVER offer … 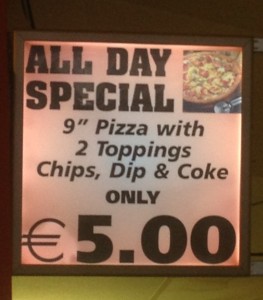 Where would you see the likes? (As it happens, across the road closer to the bridge – almost exactly the same offer.)

Star Pizza is quite spacious. I got there at about 1.45 and there must have been about 20 or so people in it, most, if not all, munching through their All Day Specials. There was a good buzz and people didn’t seem in a hurry to leave. It’s pretty clean and the guy behind the counter was patient (with a couple who were a little (!) indecisive about their choice of toppings).

I ordered. Pepperoni and anchovies. Diet Coke. Here’s what else you can have: 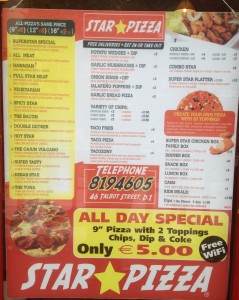 Soonish, I was presented with my box of pizza, bag of chips, can and my choice of dip (garlic mayo).

I’m not going to critique the food. It was pizza and chips. You’ll have seen a picture of it above. It was filling and tasty and there was a lot of it. And, for a fiver, I think it was amazing value. 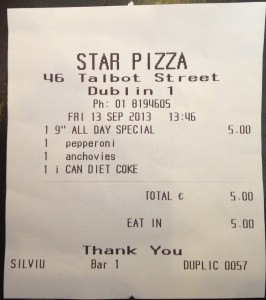 So, to answer your unasked question, the Dublin Fringe Festival. I love it. I love that tickets are about a third of the price of mainstream theatre tickets. I love the variety of spaces you get to go to. I love the informality of it (even though I was brought up in a drama-related home, I still feel less than completely comfortable going to the Gate or the Abbey). I love the creativity and innovation of Fringe offerings. I love the risks taken by small theatre companies.

I’ve seen four shows in the last week. The one that had its greatest impact so far was Postscript which I saw last night. It was in the New Theatre, a lovely intimate venue – perfect for this particular play. Click on the link for a description of the play, if you’re interested. It was well-directed, nicely paced, beautifully acted and very moving. See it if you can.