I Found All The Students

They’re all in the Mongolian Barbeque (MBBQ) (www.mongolianbbq.ie) on the corner of Anglesea Street and Cope Street. This place, … 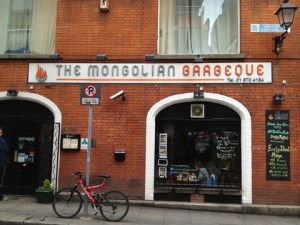 … where I went for lunch today. 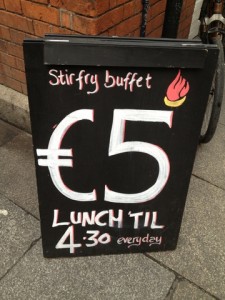 so it was, as they probably say, a no brainer.

I’d been there before with the spouse. Many years ago. I remember not being that impressed. The sort of control that you’re used to when cooking, where you can plan, taste and adjust, or even when ordering in a restaurant, when you have a reasonable idea what the food will taste like, is absent. And the consequence is that you can end up with food that tastes of nothing, or is over-flavoured to to the point of being the culinary equivalent of grey.

Interestingly, this seems to matter less when you’re getting fed for a fiver. 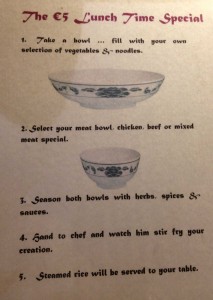 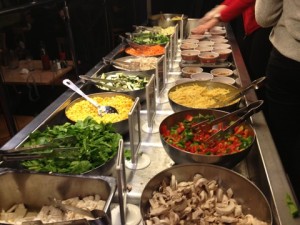 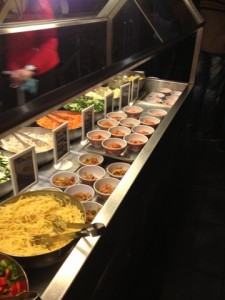 chicken (naked), pork (also naked), or chicken in various sauces/marinades. To the right of this unit there is a selection of spices and flavourings (ginger, paprika, chilli powder, garam masala, five spice, garlic, fresh coriander and so on). Further on are containers of sauces (wine, sweet and sour, honey and soy, ‘tikka masala’, and a few others that I can’t recall).

There were two chefs, only one of whom was a ‘him’ as indicated by the instructions above. The one that wasn’t a him took my meat (I chose naked pork) and popped it on a big hot plate where it sizzled for a while alongside the sizzling meats of other lunchers. 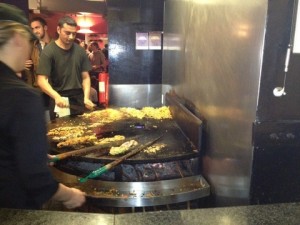 As one’s meat progresses clockwise around the hot plate, the chef that is a him takes your non-meats (mine comprised leek, bean sprouts, courgettes, spinach and bamboo shoots) and tosses it on top of your by now pretty well cooked meat. Eventually your lunch reaches 12 o’clock and gets shovelled into a bowl and handed to you.

The operation is pretty slick. The place was VERY busy which makes a nice change from my usual eatforafiver experiences. When I first got there, there was a queue at the door so I went for a little wander and came back about 10 minutes later. The queue was gone but I had to wait a few minutes for a table to be available. I was managed with brisk courtesy by a helpful staff member who explained to me how the system worked and brought me to a table.

While I was making my selections and waiting for my food to be sizzled, a bowl of rice was brought to my table and later I was supplied with a big jug of iced water.

As the title suggests, the place was full of students most of whom had learned that the capacity of a bowl is not limited by its physical properties and that noodles, being quite heavy, can act as a stabilising force for a massive wobbling pile of food underneath. 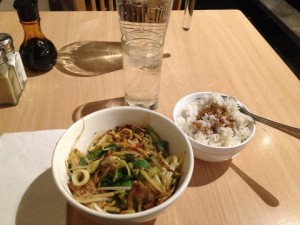 … was OK. I suspect that after a few goes one would get more used to the proportion of flavouring to use relative to the quantity of food. I under-flavoured mine significantly. On the table was pepper and salt, soy sauce and a big bottle of what I suspect was sweet chilli sauce, which I left well alone. The bowl of rice was waiting for me to join it for some time and wasn’t that hot by the time I arrived.

So there you have it. The place is very well organised, it’s kind of fun putting your food together and it’s very good value. 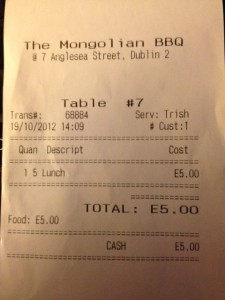 It’s not really a place you’d go to alone – I think part of the enjoyment of somewhere like this is comparing choices and seeing how they turn out, so go with a few others.

I found this guy on the wall opposite: 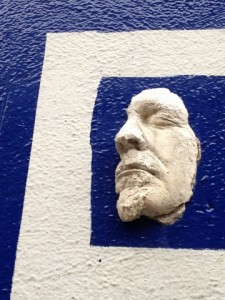